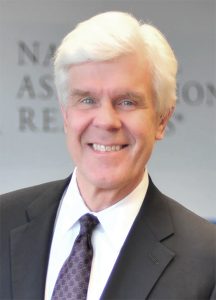 The official radio program of the National Association of Realtors®

Get the best financial advice and invest your time wisely!

A program about all-things real estate, with host Stephen Gasque available weekly on KVML 1450AM and FM102.7 Saturdays from Noon to 2 PM. Real Estate Today opens doors for buyers and sellers with critical and credible information on the real estate market. It’s fast-paced and fact-packed with experts, interviews, call-ins, field reports, and timely market conditions.

Stephen Gasque is an experienced real estate professional and award-winning broadcast journalist, who combines both careers as the host of Real Estate Today, the official radio program of the National Association of Realtors. Stephen is NAR’s Director of Broadcasting, and in that role he has managed the editorial content and direction of Real Estate Today since its launch in 2009. He is also the program’s senior national correspondent. His one-on-one interviews with real estate power players, and field reports from markets across the country appear frequently on the show.

Stephen is also the host of NAR’s video newscasts, “The Voice for Real Estate,” which air on Realtor.org, YouTube, and Realtor web pages across the United States.

Stephen was a Realtor for many years. He began at a commercial real estate brokerage in Baltimore, Maryland, helping clients buy and sell investment properties. Later, Stephen worked as a manager and sales associate for several top-producing real estate brokerages in the Washington, DC area. He was licensed in Washington, D.C., Maryland and Virginia. Stephen ended his active role as a Realtor when he joined NAR in 2008.

Stephen was born in Washington, DC, where he now resides. He received his BA degree from the Johns Hopkins University, in Baltimore, Maryland.